Could there be any location on this disreputable orb as lush, as verdant, as compellingly beautiful as the Willamette valley in June? I don’t think so and I get around.
In the last newsletter we talked about ending out March with pruning and tie downs and the chores April and May would bring. This year bud break started around the 10th of April and was complete by the 24th. The month of May, the entire month, found us shoot-thinning.

The painter JMW Turner exclaimed, “The Sun is God!” immediately before expiring. Spring in the vineyard could lead one to agree with him. The voluminous vegetation vigorously vies vertically in its voyage to that veritable Vesuvius viewed by one and all: The Sun. This is probably a good place for some disclosure. Your correspondent is an absolute sucker for alliteration. I surmise that some shall suppose this styling silly, simple-minded and shallow. I understand completely that it is not meat for everyone. If this is a deal breaker, then by all means let us know and we shall unsubscribe you. No hard feelings. 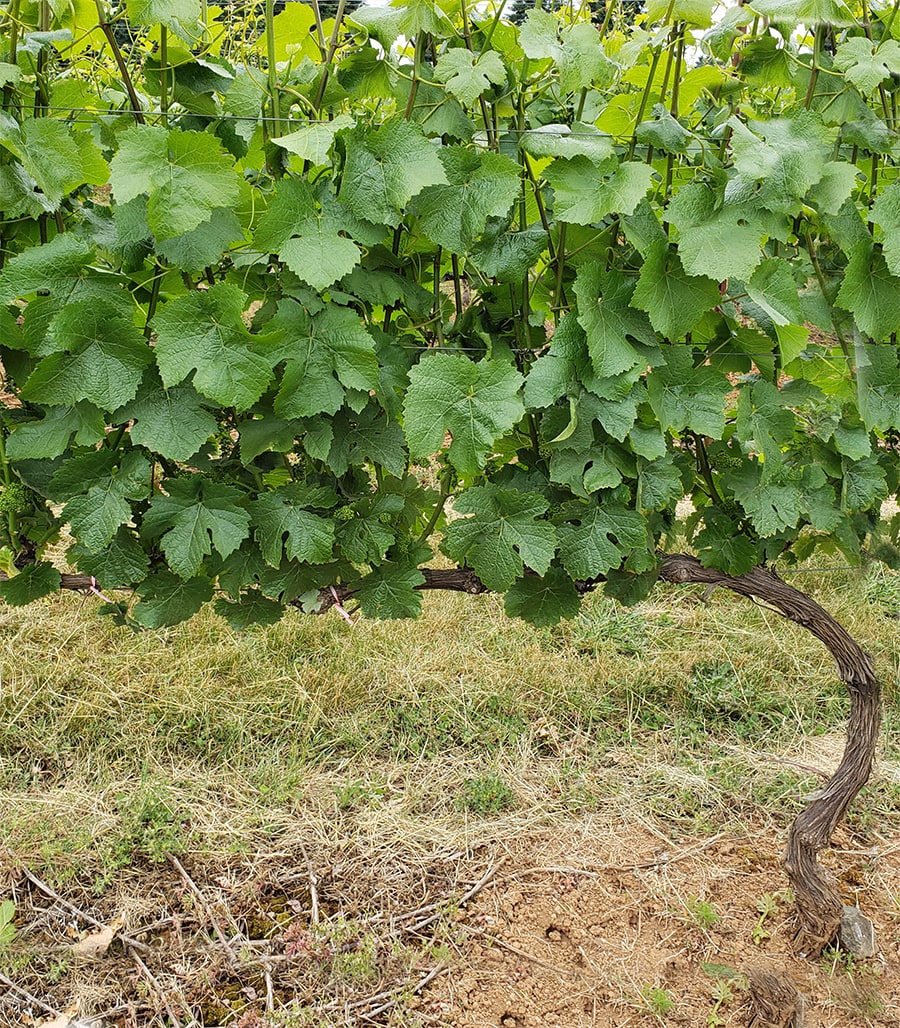 Anyway, turn your back on the vines for a day and they’ve grown six inches. You can almost feel the plants thrum with energy as you handle them. All that vegetation plays the devil with ventilation. One wants a good breeze wafting through the vines to stave off diseases such as petritus and the dread powdery mildew. So you can thin shoots now or you can thin them later when it’s exponentially harder. But you are going to thin them.

Of all the plants grapes are the most fractious. This is a scientific fact. They, like Mammon of Paradise Lost will always, “Prefer a hard liberty over the easy yoke of servile pomp.” Once they get to growing, they will go where they damn well please and use all the means at their disposal to avoid the iron discipline of the trellis. But we need them to knuckle down and put their energies into growing dark, ebon clusters of perfect little grapes. All of this requires the removal of excess shoots.

Most chores in the vineyard are labors of love. There is the tying down, the leaf-plucking, the mowing, the hedging, the tilling, and the pruning. Shoot-thinning is not one of those chores. It is tedious, repetitive, and grueling in that one has to assume this half crouch/half hunch to be able to do it properly.

It took the entire month of May to get all 2500 plants thinned. Dragon Six wanted the mission accomplished by Memorial Day. Sunday of that weekend found your correspondent finishing the last row. So grab your sombrero (you will want a wide brimmed hat), slather some on SPF 80 and grab a bottle of water. Let’s go shoot-thinning.

Dragon’s vineyard is cordon trained on a vertical shoot positioned (VSP) trellis. The end state is that each arm of the plant (the vines are trained in a manner that each plant has two arms that are supported by the fruiting wire; this wire is three feet off the ground), have no more than fifteen or so shoots on it, all of them bearing berries, with no more than three shoots per spur. The spur is the knobbly bit on the arm that the shoots grow out of. The spurs should be six inches or so apart.

Let’s start with the trunk. We don’t care to have any water sprouts coming off the trunk below the fruiting wire, so those come right off. If there are any suckers (shoots coming off the root of the plant from below the graft; they will be recognizable because the leaves will be radically different than the leaves of the plant above the graft), get rid of those as well.

Running my hand under the arm, I automatically pull any shoot growing from under because in all likelihood there are no berries on it. And we are not, as Dragon Six so succinctly puts it, in the business of growing sticks. Some shoots grow in strange, unwarranted directions. They will never submit to the constraining catch wires of the trellis. Off they go, berries or not.

Starting where the arms bifurcate we move to the first spur. We identify which shoots belong to this particular spur. Let’s say there’s seven of them. Two do not have berries. They go. One has some small berries but, just as that one cousin every family seems to have, will never amount to anything and so off it goes. That leaves four. A suitable shoot is about the size of a number two pencil. All four that are left are good candidates for further employment, but one has only one bunch of berries while the other three have two. It’s gone. Move to the next spur. Repeat. The end of the arm is where all the action is. This is because of something I’m informed is called “apical dominance.” Please don’t ask me to explain it. I can tell you that the shoot coming directly out of the end of the arm often doesn’t have any grapes on it. Take it off automatically. The remaining multitude get culled in the manner described above. Once you’ve done the other arm, you’ve completed this plant. Now ratchet yourself upright, move four feet to your left or right and do it all over again. Two thousand, four hundred and ninety-nine more times. 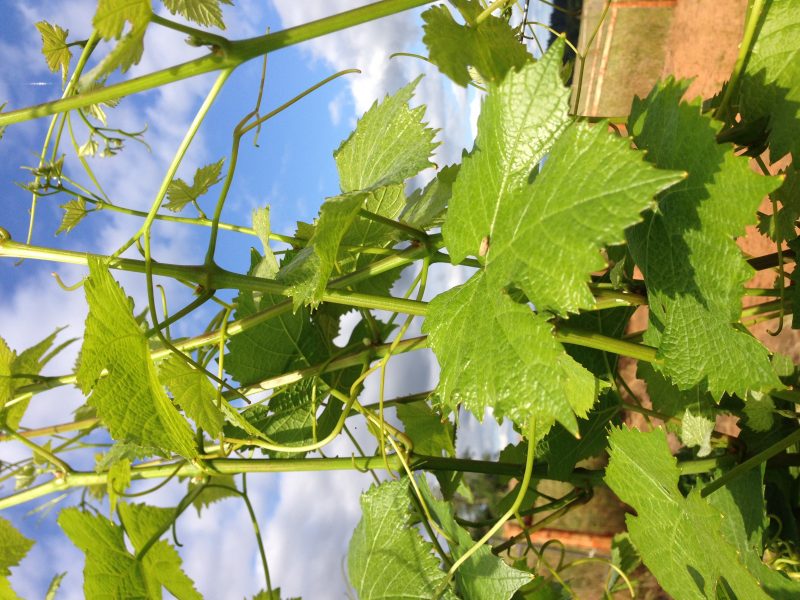 Mistakes are going to be made. You’re going to pull off a shoot that upon first blush appeared to be berry-less only to find, once it’s been detached from the arm, that a quite nice little bunch was hiding under a sheltering leaf. Shoots will simply come off in your hand. As with any repetitive task, you get into a rhythm and may find that you’ve accidently pulled a shoot that was being groomed for status as an arm next year. Do not fret. These things happen. There is always next year. And the truth is that you’re never really done shoot-thinning.

As the long, hot, summer progresses you will spend endless hours tramping up and down the dusty rows: moving catch wires, hedging, watering the yearlings. Even while doing these tasks your eye will ever be drawn to the vines themselves, pulling off new buds, finding berryless shoots that were missed, and placing the vines in as vertical a position as possible. You can’t help it. Even at the end of the day while you’re walking down the hill towards the barn in the golden haze of the early evening light and all you can think of is that first, ice-cold beer you will find your hand reaching out to the plants on its own accord constantly preening, placing, plucking. 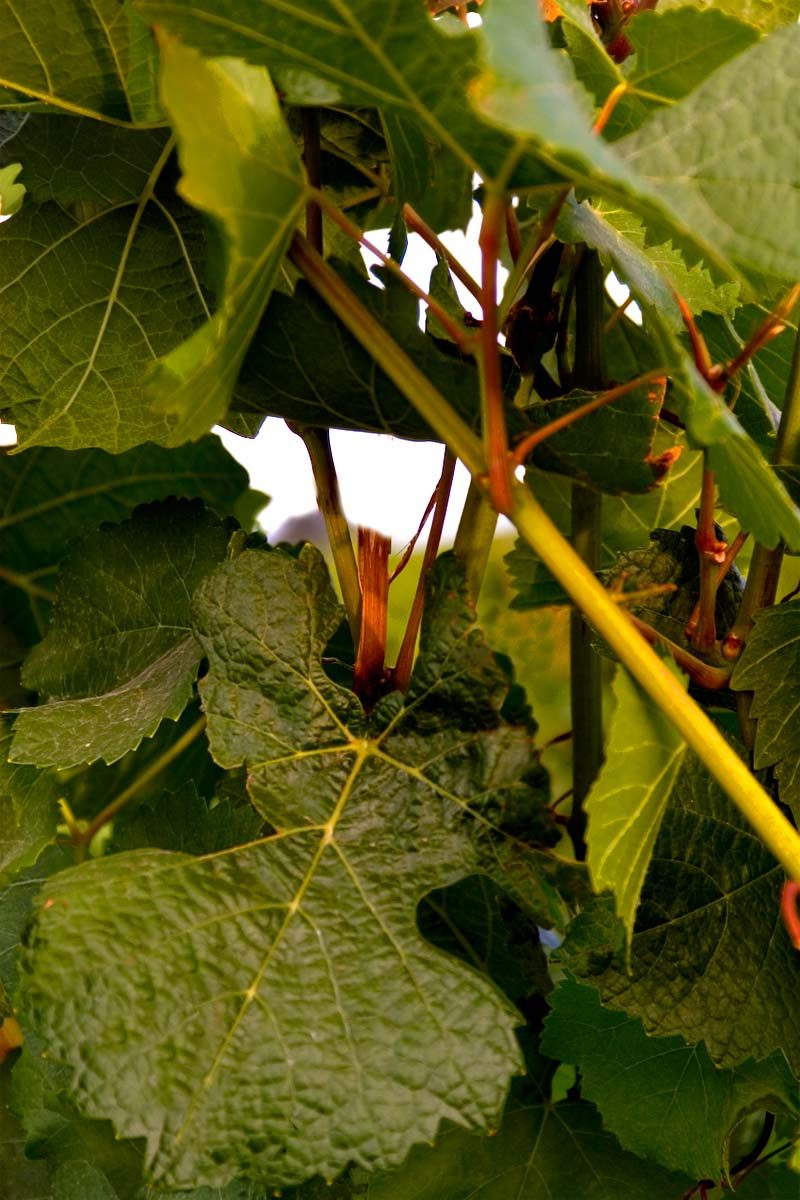 So that is the beginning of our long, hot summer. Memorial Day saw some singular triumphs for the vineyard. Our good friends at Bluebird Hill Cellars, Neal and Sue Shay, very graciously invited us to guest pour in their winery for the weekend. We met many wonderful new friends and The Real Wine Julia who said some very nice things about our wine (the word she used was “Incredible”) on the wireless. A week later we got word that Dragon’s Lair Pinot Noir had been awarded the silver medal at the Oregon Wine Awards. This is, and I quote directly from the entry form, “The 2018 Oregon Wine Awards is the largest, most prestigious and professional recognition program for Oregon State wine, cider, and fruit wine.” Our friend and guru Jean Yates informs us that there are wineries who’ve entered their wines for years and never got so much as a mention. We, of course, are extremely gratified.

Have a question about our TTP’s (tactics, techniques and procedures), wines, or Shakespeare? Send it in an email to dragonsvineyard@gmail.com and we might answer it.