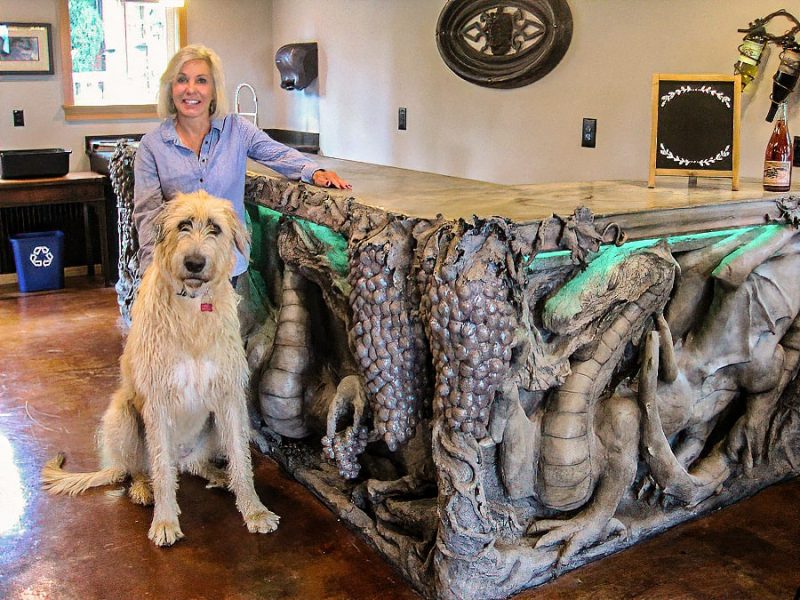 By Edie Moro
Reprinted with permission by the Tribune News
Publisher Pam Petersdorf
Published May 28, 2020

When Dragon’s Vineyard and Wine Company owner and winemaker Trudy Salerno finally received the tasting room’s OLCC license on Friday, May 15, she announced to her husband, Pete, that she wanted to open for the Memorial Day week-end, only a week away. With the help of friends Tommy Houston and Bill Woodki, both of whom served in the military with Pete, they have been busy stocking the tasting room and putting into place protocols for following the “COVID Covenant.”

Pete, who was an English major in college, announced the opening in an email newsletter that went out to fans of Dragon’s wines, showing his sense of humor, “Well, it’s here. The awaited, anointed hour; the grand opening of the tasting room. To say we are excited would be an understatement. To say it’s not going to be the extravaganza we had envisioned would be as well. . . The Rockettes have had to cancel their airline tickets and have glumly resigned themselves to staying in NYC, which is not a whole lot of fun right now. It’s a pity; they were really looking forward to coming to Monroe. So we have to be satisfied with a Covid Opening.”

Dragon’s Vineyards takes its name from the Monroe High School dragon mascot. The tasting room carries out the dragon theme with an 800-pound tasting bar created by Monroe sculptor Roderick Neswick. He also carved the fireplace mantel featuring Celtic knots, grapes, and faces from a piece of 100-year-old old-growth Doug fir. The tables were made by Houston from retired wine barrels. Three levels of outdoor patios are accessible from the tasting room, edged by an herb garden.

The opening of the tasting room is the culmination of a dream started when Salerno was in college. She received a BS in Agriculture from Oregon State University, and had always wanted to farm. Instead, she attended veterinary school there. She was a veterinary surgeon at Amazon Animal Hospital in Eugene for many years, then ran the Eugene Spay and Neuter clinic until retiring.

Salerno was also in the Army Reserve and was deployed three times to the Middle East, plus went on many humanitarian missions to Japan and other South Asian countries. While serving in Iraq, she was injured in a fall and was sent back to the United States for orthopedic surgery. The Army kept her on active duty while she healed, assigning her to ROTC at OSU.

She reminisced that she had arrived at her office in the summer. There were no students, and her office had no phone. She had nothing to do, so she asked to be allowed to take classes. She was able to attend for two years, taking all OSU’s viticulture and enology classes which had not existed 30 years ago when she was an undergraduate.

After completing the classes at OSU, Salerno did a six-week internship at Sugarloaf Winery in New Zealand. She remembers that coming into the airport, she could see that the whole end of the South Island was covered with vineyards. She ran the lab, testing parameters such as CO2 content, Brix (a measurement of sugar content), and pH.

In 2011, she planted her vineyards primarily with the Pinot Noir cultivar Dijon 115, with some of cultivars 777 and 667. The first three years, the vines are not allowed to ripen grapes. The fourth year, the grape crop is allowed to ripen and picked.

Medieval Dragon is a “Petillant Naturel” wine, made by the oldest method of making sparkling wine, predating champagne by about 200 years. It is bottled before primary fermentation is complete, based on measuring dissolved CO2. “When it is right, it continues to ferment. Too soon, and the bottle bursts; too late and it is flat,” explained Salerno. She learned how to make it when a viticulture student at Chemeketa Community College asked for her help with his senior project. “It came out really well,” she said.

Medieval Dragon does not age in the bottle and is drinkable right away. It contains sediment that collects at the bottom of the bottle. Salerno recommends storing it upright, and chilling it, then carefully decanting it into another container before serving. She is not sure whether she will be able to offer this wine again. She has been bottling it at Panache Winery in Philomath, but Jim Day, the owner, is retiring and closing down.

Salerno explained that she is a “crush pad” client. She grows the grapes and makes all the decisions about harvesting, what yeast to use, and doing some of the “punching down” of the fermenting grapes. Most of her wine is made at Brigadoon Winery, with the owner Matt Shown helping and watching the wines once they are in the barrel. He has been her mentor, and “is wonderful in helping me make my wines,” she stated.

She also has a Pinot Noir she has named Dragon’s Revenge that is still aging in the barrel after 18 months. She explained that a couple of large California wineries usually purchase grapes grown in Oregon which are bottled as “Oregon” wines. In order to meet the standard to call a wine an Oregon wine, a high percentage of the grapes must be grown in Oregon. The wineries in question were sued for not meeting this standard. They reacted by cancelling their contracts two weeks before harvest, leaving Salerno with five tons of grapes and no buyer.

Salerno ended up splitting the tonnage with Brian Schafer at TeBri Winery. Each made their own wine, using different yeasts, so they taste a bit different. The COVID-19 pandemic prevented the wines from being bottled at the normal time, so they are still waiting. Salerno said that Dragon’s Revenge will be really good.

The tasting room is following the “Covid Covenant,” as follows. “Reservations will be mandatory and gives visitors “two hours of unfettered wine tasting.” Make reservations at the website, www.dragons.wine.

Visitors are strongly encouraged to arrive wearing a mask, which may be removed once seated at a table. A staff member will meet vehicles at the gate and lead them to a parking spot. Patrons are asked to kindly remain in their vehicles until their table is ready. Once seated, they are asked not to mingle with other parties, even if they know them.

Pete adds, “Due to the requirement that we limit the number of times we approach your table, a flight of wines will be served to you all at once in carafes for you to self-pour.”

“Feel free to bring a picnic but individually wrapped charcuterie plates (vegetarian or with meats) will be available for purchase on compostable plates instead of being served on our Royal Daulton with the blue periwinkle pattern. Please, no dogs at this time because they suck at social distancing. It’s just not in their nature. Although this may not be the wine tasting experience you have been looking for we will gladly scream tasting notes to you from six feet away through our masks.”

Dragon’s Vineyard joins three other Monroe tasting rooms, which include Broadley, Bluebird Hill, and Sweet Earth, whose tasting room is inside the Long Timber Brewing Co.